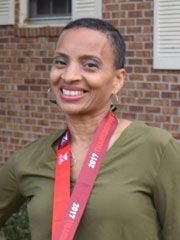 Angie was raised in Atlanta. She attended Spelman College and has worked in the non-profit sector specializing in Development and Advancement information management. She currently works in the advancement office at Morehouse School of Medicine. Angie is a two-time breast cancer survivor, with her first occurrence in 2006 and most recently in 2016. Shortly after recovering from treatment the first time around, Angie made the conscious decision to focus on her health, fitness and general well-being -- most importantly, taking part in activities that she loves. She began running and has completed numerous races, including 2 marathons, several half marathons and most recently a Sprint Triathlon. Angie is a jewelry artist and participates in aerial dance. She loves anything that involves dancing.

Angie is passionate about supporting worthy causes and taking part in community events around the city, especially those that involve health, wellness and physical activity. She has served as a Woman’s Health Navigator and has volunteered with organizations such as Sisters By Choice and the Be the Match Foundation. She is currently an Ambassador for RunSocial Atlanta, a community organization that directs, organizes and promotes races and other social, running events throughout the city.

Angie enjoys her life as a wife and the proud mother of three girls. 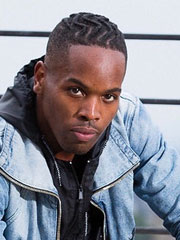 Antavius Ellison, a Georgia native, is an Atlanta based dancer, performing artist, choreographer and dance educator. He attended Georgia State University where he obtained a B.B.A in Managerial Science. During his collegiate career he began exploring his creative artistry. Antavius was introduced to GSU’s only dance organization, Dancers en Pointe, where he became the dance president and lead choreographer. Antavius has worked for off-Broadway, film and TV, working with choreographers and directors such as Stepp Stewart, CiCi Kelley, Tony award winner director Kenny Leon and Jamaica Craft. He has also had the opportunity to perform on stages across the country and to work as an assistant choreographer for local Atlanta artists. Having been trained proficiently in hip hop, he often incorporates different dance styles, building a new and approachable visceral movement language. Antavius is passionate about dance and its ability to empower people, communities and societies. He has been teaching dance across the metro Atlanta area and aspires to continue his legacy by creating and captivating the hearts of people around the world.