Cindi is a Registered Nurse and has worked in Oncology for 5 years. Oncology is a career path she loves, and she expects to remain there throughout her career. Cindi currently works as the clinical manager of a very busy office, where she finds every day filled with new experiences and challenges. She has come to know many of the patients on a personal level and is truly honored to be a part of their care.

Cindi sees her participation in Dancing with the Stars of Cobb County as a way to help patients and our community in many. She believes that the work Loving Arms does for cancer patients is a vital form of assistance for many patients and families. She is grateful to be asked to help and excited to be a part of this fun and exciting evening! 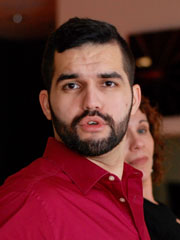 Ivan Garchev was born in Plovdiv, Bulgaria. At the young age of six he relocated to the United States. While studying to be a Physical Therapist Assistant he realized something else was pulling his attention. Growing up, Ballroom Dance was never something he saw as a future career. While visiting family he found his passion, coincidentally, while watching Dancing With The Stars. It was a Jive performance by Mark Ballas and Paige VanZant on season 22 that really caught his interest. Since that day, he hasn’t let go.

Just a few short weeks after watching this motivational performance he stepped foot on the dance floor, for the very first time. From that day on it was Ballroom Dance all day, every day. Ivan became infatuated with dance and every aspect of this newfound craft. After only three months he entered into his first competition, competing as an amateur.

Ivan has competed in several major competitions including Hotlanta 2016, Vegas 2017, and Atlanta Open 2017, surpassing numerous veteran competitors and placing strongly through each competition.
Ivan now continues to perfect his craft while simultaneously teaching. He passed his test in both American Rhythm and Smooth style dance in October 2017; becoming officially certified to teach by DVIDA. His constant hunger for dance experience in recent years has exposed him to not only the Ballroom world but also, Country, Club Latin and much more. Rhythm music is what really speaks to his soul.