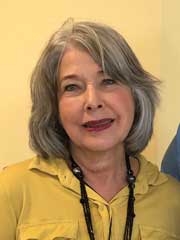 Penny E. Warren, M.S.W, a former Hoosier, received her Bachelors and Masters of Social Work from Indiana University. Penny worked in the Cobb County court system for 11 years, followed by 27 years as a social worker with the Cobb County School System where she was known as the “resource queen”. She is now retired and active in many charity endeavors when not at her beach home on St. George Island.

Penny has been a community advocate for over 40 years. She currently serves on the board of The Real Majority, a member of SafePath Children’s Advocacy Center’s gala committee, and Secretary and charter member of the North Cobb Civitan Club. Penny is also involved in the Kennesaw Business Association and Marietta Business Association. Her most recent love is being an ambassador for Youth in Mission. Penny was named YWCA Women of the Year in 2011. She is a founding member of 10 Women of Hope.

Penny is an active member of Roswell Street Baptist Church. She has been married over 35 years to Neil Warren who is the Sheriff of Cobb County. They have two daughters, Liz who lives in Good Hope, Georgia and Kim who resides in Marietta.

She is a recent cancer survivor.

James Mansfield is a passionate movement artist. He has danced for eight years in hip hop, Memphis jookin, and ballet, with an overall dance style of elegance and control. Throughout his dance journey, he has choreographed for Vanderbilt dance performances of 1,000+ member audiences, founded an eight-person hip hop dance crew, and performed original solo pieces for church and dance competitions. He has recently danced as a member of Georgia Tech's Impact ATL dance team, and he has studied dance choreography theory and contemporary dance under Bridget Bailey of BBDC. Last year, he performed for DWTS of Cobb County, so he is excited to once again perform and raise funds for people battling cancer.